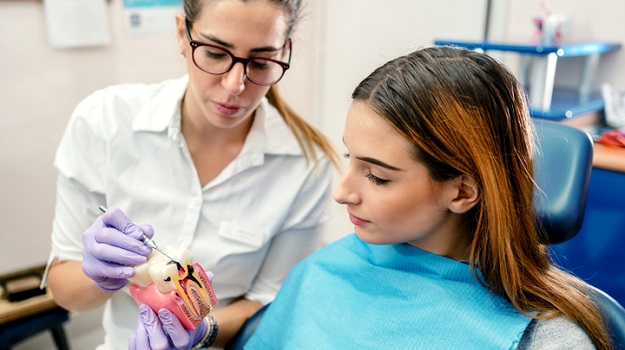 The idea that there’s a link between gum disease and Alzheimer’s is not new; studies have been suggesting the association for years. A new study published in Frontiers in Aging Neuroscience by researchers at Tufts University further supports the theory.
The research team found a link between gum disease caused by the bacteria Fusobacterium nucleatum (F. nucleatum) and Alzheimer’s disease in a mouse model. The study was initiated to identify and characterize the link between F. nucleatum-induced periodontal disease and Alzheimer’s. F. nucleatum is often associated with periodontal disease. Prior research has identified links between periodontitis and diabetes, kidney disease and cardiovascular problems.
The U.S. Centers for Disease Control and Prevention indicates that almost half, 47%, of adults in the U.S. over the age of 30 have periodontal disease and 70% over the age of 65. It’s even more common in men and in people who smoke tobacco products.
When asked how bacteria in the mouth could make Alzheimer’s symptoms worse, Jake Jinkun Chen, DMD, Ph.D., lead author of the study and professor of periodontology and director of the Division of Oral Biology at Tufts University School of Dental Medicine, said, “One, (it) generates inflammation both locally and systemically, which will affect the Alzheimer’s disease phenotype, as Alzheimer’s itself is an inflammatory disease. Two, it migrates and penetrates to the brain to colonize there and secrete pathological molecules to exacerbate the symptoms and signs of Alzheimer’s disease.”
Mice with Periodontitis had Worse Alzheimer’s Symptoms
First, Chen and his research group demonstrated that F. nucleatum in cell cultures resulted in abnormal microglial cell growth. Microglia are immune cells in the brain and spinal cord. The presence of F. nucleatum also stimulated the cells to develop an inflammatory response.
They then evaluated periodontitis induced by F. nucleatum in a mouse model of Alzheimer’s. Compared to the control animals, the mice with periodontitis had worse Alzheimer’s symptoms and higher levels of amyloid plaques and Tau protein, two abnormal proteins found in the brains of Alzheimer’s patients. In addition, just as in the cell cultures, they found increased microglial growth and inflammation.
Chen laid out four primary points about the research. First, since almost half of the adult population has periodontal disease and there are more than 55 million people around the world with dementia, it’s an “enormous health problem.”
Second, “Mechanistic understanding of an understudied anaerobic bacteria (F. nucleatum) in the pathogenesis of periodontal disease and Alzheimer’s disease fills in a gap in scientific knowledge and sends an alerting signal to dentists and neurologists,” Chen said.
Third, establishing an animal model helps identify a potential causative link between periodontal disease and a neurological disorder.
“And four, the study may provide proof-of-principle for further pre-clinical and clinical applications of the established system to study whether treatment of periodontal disease can decrease or delay the onset of Alzheimer’s in humans,” Chen added.
Alzheimer’s is Multifactorial
Alzheimer’s is clearly a multifactorial disease, with abnormal proteins such as beta-amyloid and tau, inflammation and potentially microglial malfunction involved. There have also been suggestions that herpes virus infection, glucose metabolism issues, cholesterol accumulation and general immune system dysfunction may be factors.
For example, the authors wrote, “There is evidence that the activation of microglia is related to many neurological diseases or conditions, such as brain injury, ischemic stroke and neuroinflammatory diseases. Due to the close relationship between activation of microglia and inflammation in the nervous system, it is generally accepted that the activation of microglia is closely related to the pathogenesis of neurodegenerative diseases, such as [Alzheimer’s disease] and Parkinson’s disease.”
Percy Griffin, Ph.D., director of scientific engagement at the Alzheimer’s Association, told Medical News Today, “In this study, they found evidence for increased activation of the brain’s immune system, Alzheimer’s related brain changes and cognitive changes in mice infected with an oral microbe. While these findings are interesting, this research was done in mice, and previous studies examining the relationship between periodontal disease and Alzheimer’s in humans have not demonstrated causation. More research is needed.”
He added, “We don’t know at this time whether things like brushing your teeth will ultimately reduce your risk for Alzheimer’s. What we can say is good oral hygiene is important for overall health and healthy aging. There are a few other modifiable lifestyle risk factors – like exercise and diet – that have considerable scientific evidence to show they can reduce your risk for cognitive decline.”
Back to news
Back to top
© 1985 – 2022 BioSpace.com. All rights reserved. Powered by Madgex Job Board Software